Where Knives are Made: The Story of TAKEFU KNIFE VILLAGE

This unassuming yet unique workshop tucked away in the Japanese countryside contains the legacy of hundreds of years of traditional knife-making.

Japan is famous for lots of things, and whether it be swords or kitchen cutlery, it is well known that the archipelago has a deep, rich history in blade-making going back thousands of years. Today, Japanese knives are heralded for their quality, longevity, and cultural depth. But it was not always smooth sailing for the Japanese knife industry, and in this post we will be looking at how various knife craftsmen came together to forge a lasting traditional legacy in the modern era.

Approximately 700 years ago, according to legend, a traveling knife smith from Kyoto named Kuniyasu Chiyozuru happened upon Takefu, a small remote village situated in what is now Fukui Prefecture in central Japan. He was on a journey to refine his craft, searching for good knife-making resources. “Fukui Bridge in Echizen Province” by Katsushika Hokusai, circa 1830.

Chiyozuru ended up staying in the village, making swords and sickles to sell to farmers. His expertly-made products grew quite popular among local merchants and peddlers, who exported them to neighboring areas. Each time these merchants returned to the village, they brought with them more orders for Chiyozuru’s work.

Over the centuries, the region grew to become Japan’s number one knife-making powerhouse, with the village eventually merging with a neighboring town to become the city of Echizen. Fukui, as well as nearby Gifu, established themselves as the homes of today’s various world-famous knife-producing companies and craftsmen, such as Yu Kurosaki. Indeed, the city of Echizen is iconic to most Japanese knife aficionados today.

The Japanese knife industry weathered countless periods of conflict and social upheaval in the Japanese archipelago. Even under the specter of two World Wars, the industry pressed on, thriving well into the latter half of the 20th century.

However, young Echizen knife smiths of the day like the renowned Katsushige Anryu, Hideo Kitaoka, Hiroshi Kato, and Takeshi Saji, all in their 20s and 30s at the time, saw a problem.

As the mass of production of factory-made, cheaply produced stainless steel knives began to grip the market in the 1970s, local makers and smaller, family-owned knife companies who relied on slow, traditional knife-making techniques soon began to struggle and go out of business. Various other local specialties, like traditional Echizen pottery for example, which goes back over 850 years, struggled to fit into the modern consumer era as well. Traditional Echizen pottery shop in Fukui. Businesses like these had to get creative throughout the 1970s in order to attract talented artisans and to formulate ways to preserve their old craft for future generations.

It became imperative to the young knife craftsmen, who were still in their prime, to solve the problems of declining sales, a shortage of available talent, and to ensure the continuation of their aging predecessor’s legacies.

After years of consideration and often heated debate between the young knife smiths on how to tackle these issues, they came into contact with famed industrial designer Kazuo Kawasaki, who happened to be from Fukui as well.

Kawasaki was well known for his talent in both architectural and product design. In fact, he would eventually go on to serve as design director for Apple in the early 1990s. For the Echizen knife smiths, meeting Kawasaki was a crucial step in rejuvenating their knife-making community, as he would assist them in bringing modern consumer appeal to their work.

The first major step was to establish a shared brand for themselves; together, the Echizen knife smiths formed the TAKEFU KNIFE VILLAGE name, honoring their community’s history and unifying their amalgamation of companies under a single identity.

At the same time, they spent countless hours together brainstorming and designing potential new knife designs to spearhead the success of their new brand. They strove to win the hearts of consumers and show not just Japan, but the rest of the world, the beauty and benefits of traditional Japanese kitchen knives. 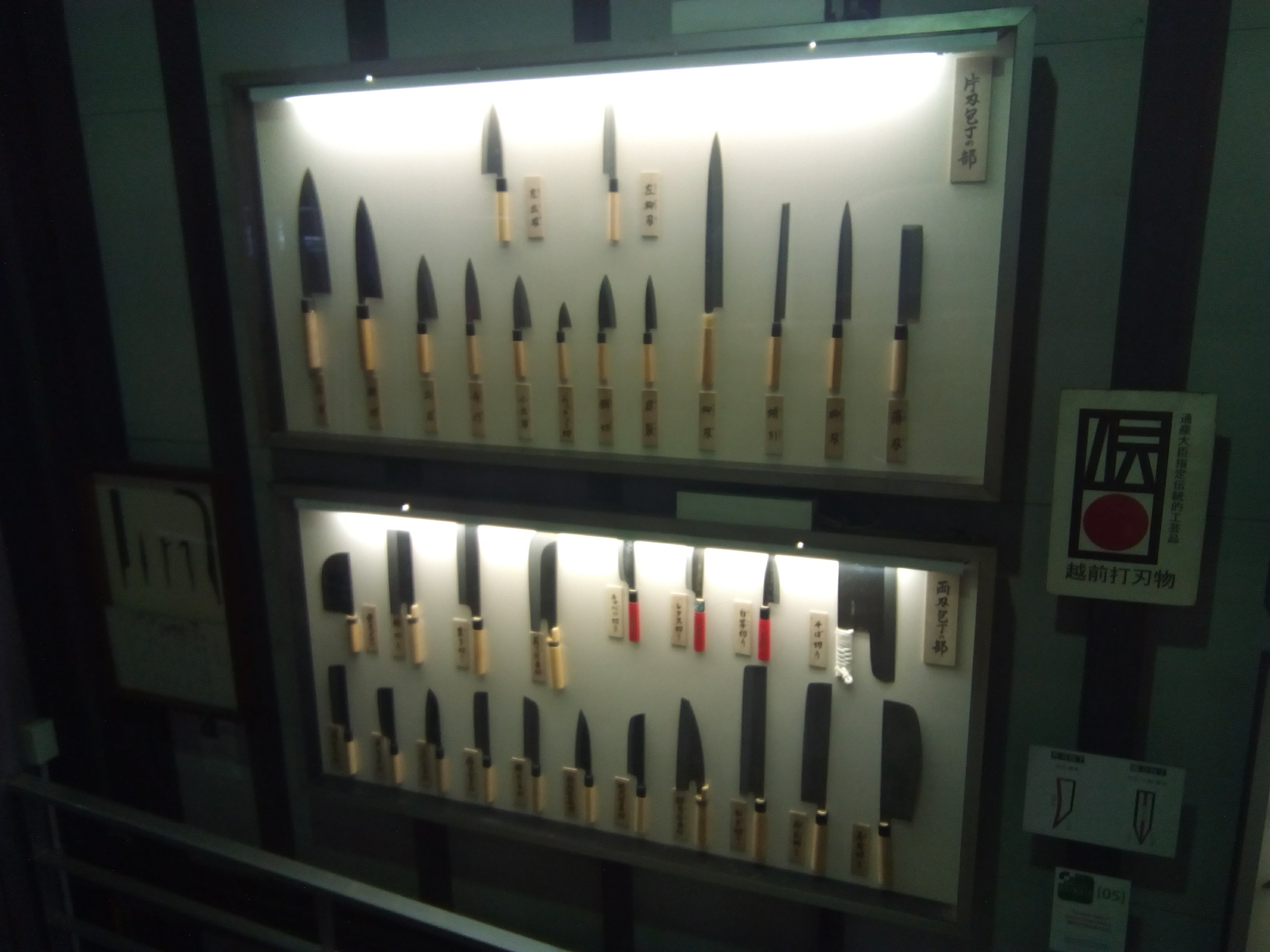 After over a year of harrowing anticipation, the knife smiths got their first lucky break after holding product exhibitions in Tokyo and New York, which were very well received. These experiences helped in blueprinting their subsequent product lines for years to come. After making a solid first impression in the market, they decided they needed a central base for them to operate from.

With invaluable planning and assistance from Kawasaki, the knife smiths constructed a knife workshop complex in the Echizen countryside, which would galvanize the look and feel of their brand. TAKEFU KNIFE VILLAGE was truly starting to take shape, and the goals of the young craftsmen were gradually being realized. The visually striking, rustic facility has become an iconic embodiment of the tireless work ethic taken on by generations of knife-makers who seek to preserve their unique, ages-old culture. Takefu Knife Village as it appears today. This complex has served as a knife-producing workshop for many traditional knife craftsmen.

As of 2022, Takefu Knife Village is a booming knife producing hotspot, with a number of its original founders as well as their apprentices still putting in the same painstaking, dedicated quality into their knives just as they did all those years ago. Makers currently extant in the Village include Anryu Knives, Kitaoka Knives, Kato Knife Manufacturing Inc., Saji Knives, and Kurosaki Knives.

We at Seisuke are fortunate enough to have a splendid relationship with these talented makers, and to have their high-quality products available for purchase on our website! You may find our catalog of their work under the "Knives" and "Brands" drop-menus. A knife craftsman at work at Takefu Knife Village.

﻿Interested in seeing and handle these traditional handcrafted knives for yourself? We encourage you to stop by the Village someday, or to drop by our shop in Portland and have a gander!